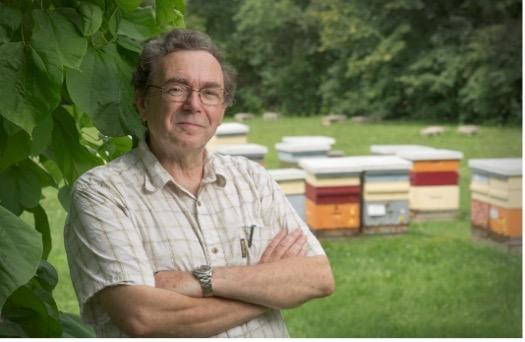 Numerous grants held since start of academic career in both Canada and USA.

Most Significant Contributions to Research and/or Practical Applications (2006-2021)

Sudarsan, R., C. Thompson, P.G. Kevan, & H.J. Eberl. 2012. Flow currents and ventilation in Langstroth beehives due to brood thermoregulation efforts of honeybees. Journal of Theoretical Biology. 295: 168-193. Studies effects of ventilation and air flow in beehives, an important aspect of colony health and a subject about which little is known. Mathematical modelling constructed a geometric model of a Langstroth beehive with honeybees and brood to captured key heat and mass transfer interactions among honeybees and air. Hitherto unobserved flow structures inside a living beehive elucidate how ambient temperature affects conditions experienced by honeybees, and how thermoregulatory aided flow expels byproducts of bee metabolism. The work has major implications for design improvements in beekeeping equipment.

Sheffield, C. S., P. D. N. Hebert, P. G. Kevan, & L. Packer. 2009. DNA barcoding a regional bee (Hymenoptera: Apoidea) fauna and its potential for ecological studies. Molecular Ecology Resources 9:196-207 constitutes a study in biodiversity using DNA barcoding, and demonstrates the applicability of the technique as it will be applied in on-going studies on Hymenoptera, Diptera, Coleoptera, and Lepidoptera from the proposal study region and directly in the proposed studies.

Kapongo J.P., L. Shipp, P. G. Kevan, & J.C. Sutton. 2008. Co-vectoring of Beauveria bassiana and Clonostachys rosea by bumble bees (Bombus impatiens) for control of insect pests and suppression of grey mould in greenhouse tomato and sweet pepper. Biological Control 46:508-14 represents one of a continuing series of publications in interdisciplinary research on combining pollination and biological control (as collaboratively pioneered at Guelph) in highly managed ecosystems, and demonstrates collaborative work involving graduate students and colleagues in AAFC. Kevan has been involved in several collaborative projects (since Peng et al.1992) investigating the benefit to crops from the dual effects of managed pollination and biological control of pests (now both insect and fungal pests together). This work has resulted in several book chapters (Kevan et al. 2003, 2007, 2020), international invitations for presentations at scientific meetings and workshops (e.g. Spain 2005,2006; Serbia 2018), and the training of 6HQPs.

US National Academy of Sciences. 2007. The Status of Pollinators in North America. National Academies Press, Washington D.C., 307pp. This has been published as the outcome of the deliberations of an expert panel of scientists. Kevan served as the only Canadian member of the panel. His input ranged from plant breeding systems to honeybee pathology and general ecological principles in relation to community structure and dynamics in relation to pollination.

Taki, H., P.G. Kevan, J.S. Ascher. 2007. Landscape effects of forest loss in a pollination system. Landscape Ecology 22(10): 1575-1587 is one paper in a series on the effects of habitat loss on pollinators (and other insects) and pollination in a fragmented landscape, the Carolinian forest ofSouthern Ontario. The approaches used GIS to randomly select study sites and typify those sites in the context of the forest patch in which they were located, and in the overall landscape where the forest remnants occurred. The hexagonal transect was developed to allow generalization through GIS from site to habitat to landscape. The results indicate that pollinators are more immediately susceptible to adverse effects of habitat loss than are plants, even though pollination is adversely affected indicating potential for long-term deterioration.

Kevan, P.G.,V. Imperatriz-Fonseca, G.W. Frankie, C. O'Toole, R. Jones, and C.H. Vergara. (Eds) 2002, 2006(1st &2nd editions) Pollinating Bees: The Conservation Link Between Agriculture and Nature. Ministry of Environment, Govt of Brazil, Brasilia.313 pp. This represents the culmination of the São Paulo Declaration on Pollination and has since been followed up by the CBD-FAO International Pollinators Initiative and "São Paulo+5"meetings in 2004.Kevan’s continued involvement in these, and other, international initiatives on pollination conservation speak to the importance of Canadian expertise and representation. The publication of these two seminal books with Kevan’s central involvement, establishes his international reputation and his capacity to work with teams in complex joint projects.

The papers and books listed above and below exemplify my research as it relates especially to pollination, including community structure, symbioses and mutualists, conservation and interdisciplinary, applied and collaborative R & D, some are singled out because they deal with practical issues and potential R, D & I.